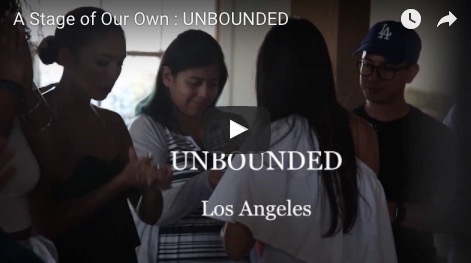 I, from the infinity of my being,
Speak with intentions that move mountains.
With messages from the choir of my lineages,
Who empathize and protect life.
A rooted tree upon the earth that nurtured me,
Reverberating through the branches that are my fingers. 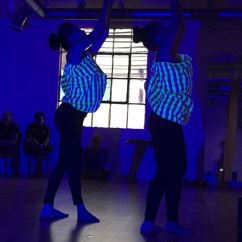 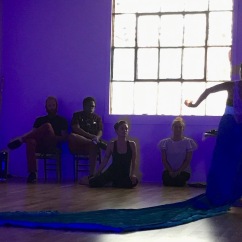 Saturday, August 12th’s event was A Stage of Our Own’s debut performance in LA/Tongva. A Stage of Our Own originated in Honolulu to create spaces for collaborative creative work, activating cultural and ancestral connection in the present moment.

We started off in a circle, with people trickling in. We held hands, and began with our songs from each womyn in the cast. Kristen then shared her oil by dropping a few drops onto everyone’s palms, allowing each person to create a gesture with their palms together, up to their noses, then down to their chests. She named this oil “Pule”, translating to “pray” in Hawaiian. She shared that her ingredients are sustainable and provided by the Big Island.

I then came into the circle and taught all present a group choreography, so that the audience would be able to engage with an embodied, reciprocal sharing and acknowledgement– an embodied phrase created specifically for the event and on that day. We started from the ground up—re-cognizing aihaʻa and activating our connection to the earth through our feet. We then reverberated energy through our fingertips and wrists, as our arms lifted to the sky in the count of 1-2-3-4, and down. We activated the area of our naʻau, our human origin and one to not be afraid of—by doing the movement of an ʻami—hips moving in circles. We danced this for one another, and then altogether repeatedly, as Micki went into the center of the space and read aloud voices from Guåhan that were shared with her from the past two days. In each repetition, I felt my stomps becoming heavier with the ground, and my hands reverberating faster. We danced until each voice was heard, til the last time and location stamp was read aloud.

Leolani then danced her piece, breaking the museum and tourism image of Tahiti, the exotic “island of brown people”, and invigorated the space with her faʻarapu and unbinding a rope—a separation between audience and performer.

Christine entered, embodying the eternal night with the tea lights as the ancestors that she held in her hands. She was the lighthouse, the ocean, the sky, the goddess, in one—dancing the Philippine folk song Oasiwas among the constellations behind her.

Micki brought in the spirit of her ancestor, her grandmother, by sharing through performance her grandmother’s physical-spiritual transition in the piece Metrics of Tenderness. Leolani and I joined as extensions of Micki’s words—transferring voice to body.

Christine and I followed with a piece Ilaw, balancing the candles—with the ancestors upon our palms, dancing with one another as bodies that followed the flow of the rhythmic sound of receiving batok.

Following this was Magellan Doesn’t Live Here, a film by Micki—showing us all Chamorro navigation and its sophistication—utilizing and finding Polaris, showing us the sakman Chamorro, juxtaposed with the image of a white yacht arriving upon the island. The film let us know from a Chamorro perspective that Magellan was a passerby on Guåhan—nothing more.

Christine, Micki, and I joined in the center of the space to dance the Philippine folk dance Maglalatik—re-staged as a message of reclamation, for purposes of invigorating the movements and messages hidden within the dance. We wore the barot saya, and the coconuts in our hands created a sound against the sequences as we danced. There was an image behind us of clouds that appeared to look like an exploding bomb, from the shores of Guåhan. It was time to bring out the dance, and utilize it for solidarity efforts, to re-member and re-cognize the dance for what was hidden in its choreography.

I then spoke my poem, written on the night of hearing North Korea threats to the US through Guåhan. I hadn’t written in months, and found that it flowed through naturally as if there was no other way the moment was to be conducted.

We concluded with some talk story, an opportunity to debrief (somewhat), and to put out a call that there is more to come, followed by our closing chants.

We stand, cry, dance, chant, and sing for our islands,
Because we are our islands
And our islands are us. 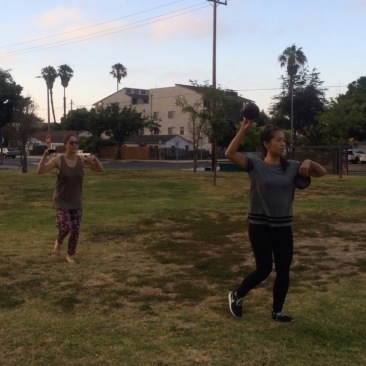 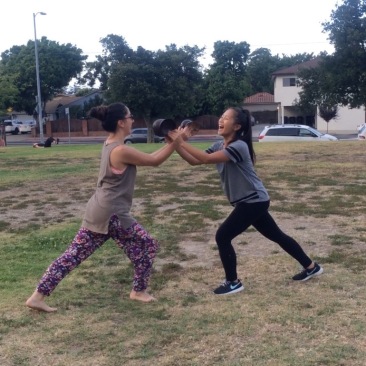 In preparation for A Stage of Our Own’s Unbounded…
A few days ago, Micki, Christine, and I met up at Alla Park to learn a version of the Philippine folk dance, Maglalatik. I was sharing with them in our first meeting the intention of this dance as I was working through it in Honolulu. This dance has always held my focus as I watched it growing up, however it was always performed by men and in a way that was more acrobatic. Maybe it was the vibe of Hawai’i the past few years, and the genealogy and cultural work I was investing my energy towards, that manifested the decision to dance this with a team of womyn, and cross-train it with kali lessons. In this process, I felt it natural to ground lower to the floor, and have the music be in a minor as opposed to the major. I started to connect more to the vibe of resilience embedded in our dances, and became energized with visions of resurgence.
Growing up dancing in LA, it was a given to consider getting into entertainment. The social structure is just shaped in this way here. Over the years, traveling, studying, absorbing, reflecting, being open to other islands and the social connections embedded in dance, cosmologies, and the creative process are where my energies are. It’s interesting being back in LA, this entertainment capital of the world, because I find myself re-learning and re-cognizing that social connections are the focus here. However, I’m back and I’m here wanting to build my understanding and relationship to this place and LAND as Tongva, Turtle Island.
Here I am again, and in all the work I am in and am getting into, I come with these intentions– to continue to serve with and expand upon my understandings of dance in its holisticity and cognizant activation of our bodies where we currently stand, in a way that is critical and meaningful between us, the people of the land, and the stories that already exist.